Don't miss out any feature release. Check out this page to keep you updated on what's new and all things we are cooking for you!

Written by Elise Gonzales
Updated over a week ago

See what we are rolling out! Get updated on what's new and recent updates within our CloudExtend application! ✨

The October release includes a new Upload option called "Burst Mode" as well as a number of bug fixes and performance improvements.

Previously only available in Preview mode for select customers Burst Mode is now available to all customers as a beta feature. Learn more about Burst Mode here.

Previously the Update Action had a checkbox to upsert 'all' records. We've made this more obvious by including two buttons, Upsert Selected or Upsert All. 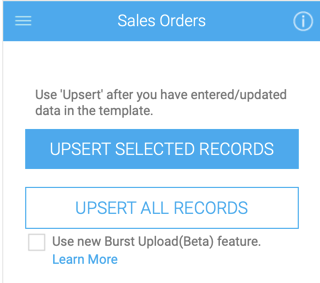 Use the chat icon at the bottom of the page to talk to our support team or send us an email to cloudextend-support@celigo.com.